Blaise Pascal, a French mathematician from the 1600’s, once proposed that people should live their lives as if there were a God, because by doing so, they have nothing to lose and everything to gain. Although Pascal never intended this statement as a proof, it’s often used by religious apologists as an argument for the belief in God. It places the assumption of a god and the afterlife into a weighted game around such beliefs, instead of first looking at the benefits of a good life in relation to the possibility of a god.

If one were to wager on the existence of a god or gods, the next critical question is which god should one believe in? Our world is filled with many major and minor religions, and the arguments for faith in any of them comes from inconsistant revelation. Many of the world’s monotheistic religions require devotion to single unique deity based on the faith on those that have witnessed personal revelation. Although personal revelation is often found acceptable from religious texts of the ancient world, modern day revelation is often associated with mental illness and psychosis. Pascal was a Christian and placed his wager in the scope of the Christian God, but doesn’t address conflicts with other religious in what’s often refereed to as the wrong hell problem.

…I’ve always though the term God fearing was odd because I can’t think of a single instance where fear and paranoia brought out the best in people…I know it sounds corny, but I think that being a good person because you want to be a good person is probably a lot more satisfying than being a good person so you can get into heaven…It never ceases to amaze me how much human misery is committed in the name of God…I’ve never figured out if I believe God exists, but if he does I think he must be terribly disappointed in us. -Levi3

Pascal’s Wager seems greatly troubling when you think about people who would follow a particular faith for personal gain rather than being a nobel person for the sake that it benefits all of society. I think a better way to approach the entire concept of God is better appreciated by the Roman Emperor Marcus Aurelius who said the following: 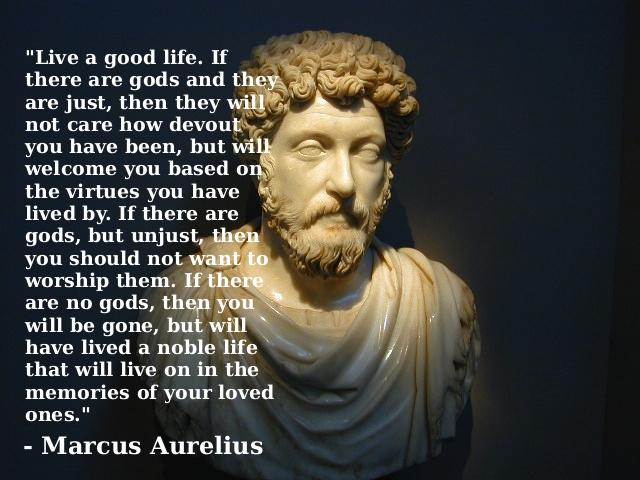 I didn't know something like Pascal's wager had been established. For a brief moment I had anticipated this article being something spawned from a Star Trek film because of the word "khanism" in the address bar. I was relieved upon learning it was far more interesting.

A while ago, I had the same revelation as Pascal and Aurelius; it's logical. To fear a God (possible misnomer) isn't a positive quality, but to live a good life regardless of one is. When I was about thirty years old, I had thought what Marcus Aurelius had so clearly stated:

Thank you for posting this. I feel more defined now.

[...] post is a response to the article: khanism.org/blog/the-non-theists-wager I posted a comment there but the blog input method is severely flawed and corrupted the perfection [...]