The modern office cubicle came about sometime in the 1960s. A cubicle seeks to grant some degree of privacy while taking up a minimal amount of space on open office floors. They are usually easy to assemble, dismantle, move and resize. People who work in cubicles typically have all sorts of photos, toys and other knickknacks on display if the work environment allows it. In this way they are all slightly unique, as unique as each individual worker. In the same way, under the decorations and personal items, each cube is exactly the same, just like all their occupants.

Some people in cubicles enjoy their work, but you wouldn’t be able to tell by our entertainment. Many cartoons exist, such as Dilbert and We The Robots, movies like Office Space and TV series such as The Office; all comedies expressing the asinine nature of office jobs. The term “cube farm,” referring to a large section of cubicles, is often a pejorative.

The original intent of many corporations was to create products or pursue innovations while distributing the workload evenly and efficiently over many employees with various skills. However, many problems and evils arise from large companies such as detrimental environmental impact, lobbyist who push for laws in corporate favor and deceptive practices that lead to such things as the 2008 financial collapse. These institutions may have originally been established with the best of intentions, but many have grown large enough to stifle innovation and hold-fast the creative minds of those that could be making totally new contributions to society.

The cubicle is a symbol, not just of a corporate workforce, but for those who do not enjoy their work, it is a symbol of feeling trapped. The money provided from high paying jobs becomes addictive, even if satisfaction with the jobs diminishes. A standard of living is built around such an income, and even if there is a possibility a worker could make just as much on a venture of his or her own (or not make as much money but be in a job one likes more), there is often a feeling of risk that cannot overcome the sense of security of full-time employment. 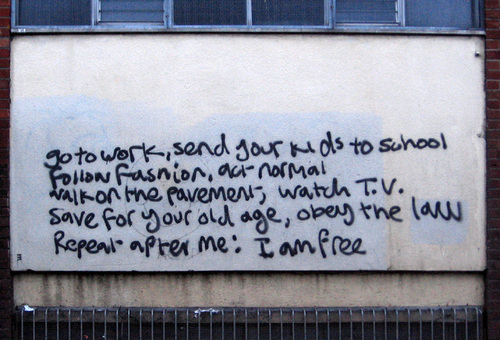 Some people may be happy owning a house, settling down with a wife and be content to watch their children grow up. There’s nothing wrong with that. There is a difference between being content and being complacent. So long as we are never complacent, we can chose to approach life in moderation.

Even if we are content, we must never forget what allows us to be content. We can not forget about the river of exploitation that brings us our material standard of living and the entertainment that shows us the path to a revolution, yet also pacifies us so that we will never embark upon it. We can not live in the constant realization what our lives cost those who are exploited to give it to us, because to be content in that realization would be similar to attempting to live in the actualization of our own mortality. Still, we must be willing to acknowledge that realization because at the opposite end of the spectrum is a danger, where we are content and seek to justify our content by embracing fundamentalism, blind nationalism or other types of propaganda designed to mask the true cost of our perceived freedom.

To live one’s life in moderation is to remember to never carry over excess vacation days. It is to place friends, family and people above all things that are inconsequential. It is to remember all those in the lower classes who labor to make our mobile phones, those whose lands are devastated to bring us oil and those who die to give us our diamond engagement rings which have no value.

It is to resign the endless quest for material things with the simple pleasures of being in the fellowship of others. It is realizing the extra ten or twenty hours a week at work will not change the world, nor will the world fall apart if those hours are not spent sitting in a cube, nor will the overtime compensation be able to buy love in mason jars or more time with one’s kids in pill form.

The cubical and the corporate job can provide a sense of security. We pack away money into our investments, fill up our retirement plans and and await the day we can eventually relax. We often fail to think about the fragility of human life and how quickly it can be lost. We don’t know if we’ll get another hour, much less another thirty or fifty years. Although it is prudent to be responsible and plan for that potential eventuality, if at some point you are lucky enough to turn sixty-five years old and look back upon your life, what will you see?

“Don’t talk abt [sic] ‘progress’ in terms of longevity, safety, or comfort before looking at zoo animals compared to those in the wildrnss.” -Nassim Nicholas Taleb (Tweet)1

There are those who escape. Some create their own businesses. Some purchase mobile food trucks or start restaurants. Some may decide to sell everything they own and travel. They may decide to join the peace corps or a non-government charity organization. Some may get work visas and live in other countries while others return to school in order to teach. Some learn how to farm or join sustainability projects. Some feel that they cannot do any of these things due to loyalty to their children and families.

Even if one has obligations, it is not impossible to pursue a life that leads in fulfillment and not monotony. Furthermore, it still carries the same challenges one would have without those responsibilities. There is still a sense of risk which may feel like the edge of a cliff. However if one has the support of friends, family and good people, then being on the verge of something great should be viewed as standing on the summit of endless possibilities rather than looking into vast abyss of the unknown.

Above all, one should be guarded from the desire to replicate the safety of the past. The danger is not in finding a life that’s fulfilling, but rather creating a new life that involves the work of others. One should be careful to share in this new adventure with any fellow travelers. As it’s not uncommon to feel jealous of those who decide to change their world for the better.

So to is there a tendency to assume that those who take greater risks should have greater awards. It won’t feel that way of course. Those who help are often seen as being given the opportunity to do something great. There may even be a sense of shared vision initially, before that worker is subjugated. An essential part to the business, paid a good amount yet a fraction of what he or she produces and eventually placed in an office, cubical or behind the counter of a deli. Feeling trapped in an unfulfilling world, the journey comes full circle. We as human beings, must fight to break that cycle.

2 This quote was used by Senator Paul Tsongas in his book Coming Home, but predates his use by decades from an unknown source. It was also given fame when Anna Quindlen used it in a graduation speech at Villanova University and in her book A Short Guide to a Happy Life

I had no idea Nassim Nicholas Taleb was on Twitter.. I normally think of Twitter as a vast wasteland of narcissists and celebrities, which much overlap between the two. Though I did read "The Black Swan" and definitely was kicked in the face a few times by his arrogance.

I don't work in a cubicle because I have a job that allows me to work from home. If I went on-site to work, I'd have a cubicle though... which I don't particularly mind. This post is very timely for me, though, because I've been immersed in a state of existential angst for some time about my own state of affairs (lack of degree, boring unfulfilling job) juxtaposed with my boyfriend's freedom. He works at the Renaissance fairs across the country, travels by train because he has the time to do so and has seen more places in a few years than I have in my entire life. He has friends all over the country, few personal belongings and if he wants to go some place, he can, unencumbered by things like "paid time off" or really anything remotely regarding obligations. The tradeoff of course is living outdoors in a tent most of the year, which he doesn't have an issue with. He also got a five-figure settlement within the past year due to a bike injury lawsuit, so he's also a serendipitous blankety-blank. He has asked me to join him countless times but I can't deal with a lack of bed and regular access to showers. I spend an inordinate amount of time thinking about my lack of freedom though.. two weeks of vacation a year is not freedom. One of the biggest motivators for me to go back to school despite my continuing poor health is the ability to have more free time (hopefully) with an engineering degree/career.

Thanks again for this :-)