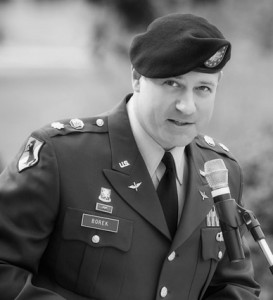 This morning I attended a Veterans Day memorial service. A crowd of people gathered in a somber mood for a ceremony of patriotic hymns and praise of all the soldiers who have served the United States. Yet as singers and speakers praised those who “Fight for our freedom,” in an emotional tidal wave that sent tears around the crowd, I couldn’t help but think to myself that these troops do not fight for my freedom.

Major Brian Borek with the US Army spoke to the audience. A distinguished officer who has served in various capacities gave homage to friends; fellow soldiers he had lost in Iraq. His words chocked and he held back tears as he spoke their names. His speech felt real in a sea of clichés. And even as he spoke about the friends he had lost I couldn’t help but think, keeping the utmost of respect, they did not need to die.

US Soldiers have fought for our freedom, and the freedoms of others during the American Revolution and World War II. The American Civil War could possibly be considered a fight for freedom, although some would consider that a stretch. Although we did intervene during the Kosovo Conflict in 1999 to help other NATO allies in stopping mass genocide, other recent examples are not as plentiful.

Vietnam cost the lives of over 50,000 troops and the resolution that led us into that war was based on attacks in the Gulf of Tonkin, attacks which a 2005 declassified NSA report proves never actually happened1. Who today will say that war in Vietnam was right and justified and ensured our freedom?

In 1951 Dr. Mohammed Mossadegh was the democratically elected president of Iran. In an effort to bring more of the nation’s wealth to his own people, he nationalized oil reserves that had been previously held by the British. Admits fears of communism President Dwight D. Eisenhower, in conjunction with the British, started Operation Ajax which succeeded in a coup d‘état against the democratically elected president and lead to the installation of the Shah who would come to be known as a tyrannical dictator2.

On September 11th, 1973, Chile’s president Salvadore Allende, a democratically elected official, was overthrown leading the country into an era of horrible war and bloodshed3. Documents declassified during the Clinton administration show that US black operations were the direct cause of the coup d’état and were ordered to carry out Allende’s deposition by President Nixson, leading to the US participating in what can only be described as state terrorism4.

Today we have yet to find weapons of mass destruction in Iraq. Col. Lawrence Wilkerson, Ambassador Barbara Bodine, General Jay Garner and several others involved in initial reconstruction of Iraq have come out publicly to denounce the massive failures in the Bush administration to plan and manage the reconstruction effort5. Alan Greenspan, in his recently publish memior, states that the war was mostly about oil6.

And the list does not end there. As time passes and more information becomes declassified, it is very clear that the US has on many occasions removed elected officials and replaced them with kings, so long as it suits US interests. In many cases this has been done covertly using operatives and not direct military involvement. Still it is important to note that our great country, our home of the brave, has and continues to do very questionable things to ensure a US friendly version of order in the world. In an increasing number of deployments in the past few decades, our soldiers have not fought for our freedom, they have only fought for our standard of living.

Those who fight for freedom today are very different from the freedom fighters of old. They do not carry guns. In a nation where we have stability and security, the enemy of those freedoms is our own complaisance. Those who fight for our freedoms include the American Civil Liberties Union, Lawyers without Borders, Iraqi Veterans Against the War, Drug Policy Alliance and the many other groups large and small who work diligently to defend freedoms that politicians attempt to take from us in the name of ensuring our security.

Do our troops prevent the government from acts of domestic surveillance against its own citizens? Do they prevent people from being captured and locked away in secrete prisons, tortured and held without any charge or being accused of any crime? Joshua Key fled to Canada and sought asylum claiming that while in the US Army he was ordered to commit war crimes7. We label him a deserter, but isn’t his defiance to an unjust war a staple of the foundation of America?

Recently Bush authorized the deployment of the First Brigade of the Third Infantry Division, three to four thousand soldiers, to be deployed domestically on American soil, striking down Posse Comitatus8. There is no reason to deploy troops domestically, and there is a reason why Posse Comitatus existed to keep such events from happening. The purpose of the police force is to serve and protect the people. The purpose of a standing army is to protect the state from its enemies. When soldiers are deployed domestically and take the role of the police, the people tend to become the enemy.

I stood at the memorial service and listened to the speakers and the people around me with tears filling their eyes. I did not clap with others. I instead began to understand how so many people could be carried emotionally into blind patriotism; how they praised soldiers that our own government has neglected. We are taught to praise these soldiers for their sacrifices, and although I do acknowledge many of them made sacrifices, I do no accept that all of their sacrifices were in the name of freedom.

“Mom, I killed two hundred and twelve people and some of them didn’t deserve to die.” -Said by Corporal James Jenkins to his mother before he took his own life9

What is worse than soldiers dieing in vain for causes that aren’t just? It is a people that refuses to stand up for our troops and demand an end to reckless wars which cost soldiers their lives needlessly. We can not truly honor our veterans or the freedom they are told to fight for unless we use that freedom to bring them home.

I appreciate your kind words about my speech honoring our veterans. I truly believe that no matter what each of us believes, it is this freedom to speak and express freely that makes us a great nation. God Bless our veterans and our nation. BB

Hello Brian, maybe you remember me. I am an Austrian police officer and we worked together at the UN Mission in Haiti in 1995. It would be great if you have time to write a short message.