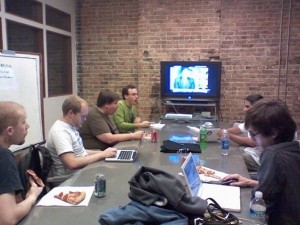 On November 4th, I found myself at a Chattup Election Party in downtown Chattanooga. We were a room full of mostly liberals and a few conservatives; an island with an endless sea of red outside the windows. A projector and a monitor displayed two news coverage feeds. There was beer, pizza, camaraderie, mobile social networking devices, constant twittering and a large roar as several networks declared Barack Obama the winner of the 2008 US presidential elections.

As everyone cheered, I simply smiled. I saw a crowd both on TV and in that room that was completely enamored with Obama, his campaign and legacy. I am a liberal and deep down, I did want Obama to win. Still in recent weeks I’ve come to understand why people look up to and support McCain, even if I did not think he would make a good president in these times. Still, waving a marking slogan of Change and Hope seemed cliche and trite and made me question if even Obama would be able to turn this country around.

“Changes means nothing. It’s just the word. And it’s a cliche. Just to repeat it has no meaning. You have to say, ‘What are you going to change?’ and I would argue, ‘You offer no change. You have the same foreign policy, you want more troops in Afghanistan, you’re not talking about only going to war with a declaration. You don’t want to deal with the monetary financial crisis in this country. You want to keep, you know, the system together for the benefit of the banks and the big corporations and politicians1…” —Ron Paul

McCain’s concession speech came rather quickly after the announcement. His crowd seemed bitter, but had the election going differently, most likely the Obama would have been equally so. Obama waited a bit longer to give his victory speech keeping those of us in the Eastern timezone up past our bedtimes. It started with the traditional stump which I had heard the day before followed by thanks to specific supporters and family members and so forth.

One of the concerns I’ve heard about Obama is that he promises a lot, and with the condition of our world both economically and militarily, there is a chance his promises may not be fulfilled causing an generation to become disenchanted with the policies of progressive liberalism. At one point during his victory speech he said the following:

“…understand the enormity of the task that lies ahead. For even as we celebrate tonight, we know the challenges that tomorrow will bring are the greatest of our lifetime — two wars, a planet in peril, the worst financial crisis in a century…The road ahead will be long. Our climb will be steep. We may not get there in one year or even in one term, but America I have never been more hopeful than I am tonight that we will get there. I promise you we as a people will get there…”

He did two things with those words. First, he set the standard for success as a realistic one; far from the epic folds of hope and change that flowed from the river of his advertising campaign. Second, he prepared himself and all ready began to campaign for the following election by making a promise he could keep to his constituents.

As I listened to Obama and looked upon the crowds who cheered “Yes, we can” as well as the hopeful people around the room, I couldn’t help but hope myself that Obama would be able to live up to the expectations that, for him, have been set so very high. I saw a man who limited his attacks and tried desperately to run a clean campaign; a man who in doing so, showed that seeking peace was not something to be seen as a weakness, but that in that calm comes strength. I believe that strength is what helped him win the election; strength and a very strong youth campaign. Sarah Palin being grotesquely unqualified didn’t hurt either.

I hesitate to fall in line with those who are following his cult of personality, but part of me does want to believe his words are genuine. I think his desire for peace and equality and his ability to stay collected in extraneous circumstances may be a strong start. He may not be about real radical change, but he is a strong moderate that seeks to bring us back to an era of stability.

In the previous administration that has often said to the public, “Hands off, let us handle this,” Obama may have the personality necessary to bring American back to the point of believing its citizens have a vested interest in their nation. Again, from his victory speech:

“…This victory alone is not the change we seek. It is only the chance for us to make that change. And that cannot happen if we go back to the way things were. It can’t happen without you, without a new spirit of service, a new spirit of sacrifice…”

Will Obama be able to move people to care for one another and work for the country in the way Franklin D Roosevelt asked Americans for “meat-less Tuesdays?” What real change will he accomplish within his first one-hundred days in office? At the very least he has captured the belief of more than half the nation and now we will see how that belief will play out.

But now is not the time for American to relax and think everything is going to be all right. There should be no false sense of security that the war will be over, that the economy will right itself and that justice will be served to those who have led our nation astray for so many years. Now is the time for all people to stay just as politically active as they did during the election and to hold the new democratic majority government accountable to the people that they represent.

“I want young men and young women who are alive today to know and see that these new privileges and opportunities did not come without somebody suffering and sacrificing for them” —Dr. Martin Luther King Jr