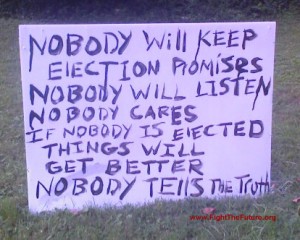 Are you ready to throw your vote away? There are two major parties and heaven forbid you vote for anyone else. After all, a vote for a third party takes a vote away from either Obama or McCain and could cause a candidate closest to your values to lose, especially in swing states. So we are told we must vote strategically; that we must vote for the “Lesser of the two Evils,” and thereby trapping us in an undemocratic two party system with only a perception of real choice.

In previous Canadian elections, citizens have typically voted for the party they wanted. Canada has four major parties as well as several minor parties. Recently Canada has spent more money on their military than they ever have since the cold war, with leaders like Prime Minister Stephen Harper pushing the country into strong military integration in a culture that has been predominately non-military1.

With recent concerns about how the direction Canada was moving both militarily and environmentally, many groups arose encouraging Canadians to vote strategically in the recently held elections; that is to vote for a candidate that is more likely to win who holds their general liberal views rather than voting for the party they agree most with. There are projects such as Vote for the Environment and Vote Swap Canada that attempt to establish systems were votes are swapped between swing provinces so that they can still vote for the party they chose, but still making an impact at removing the conservative candidate Stephen Harper. Despite such efforts, not only did Canada’s Conservative party still hold the majority after the 2008 general election, but Canada also appeared to have the lowest voter turnout in the history of the confederation2.

In the United States, the idea of strategic voting has been more of the norm rather than the exception. Many Americans do not actively think about how they are casting tactical votes, but even those who disagree with the views of either candidate, feel that a vote for anyone else would be fruitless. Third party voters are often seen as, at best, idealist and at worst, nut jobs.

But the fact remains there are other people on that ballot. A citizen could vote Libertarian or Green or even Socialist. The prevalence of the Internet has made communication and advertising more affordable, but the Internet is still too young to compete with the dominant behemoth of standard multimillion dollar media. There is nothing stopping any of these third party candidates from people voting for them, or even getting the necessary votes and funding to be eligible for public campaign funding. The only thing missing is belief. In today’s word, belief is bought with advertising.

Sean Tevis did an amazing job in raising funding for his campaign for his race as state representative of Kansas by means of a very compelling webcomic showing that it is possible to leverage the creative power of change with a very powerful message that can affect the belief of individuals in his state.

The third party system will never be able to put up a viable candidate for president if that is their direct goal. Parties need to start at the bottom. All the focus should be put at getting a congressman in office. If any party can get two congressmen into the House, then they might have a shot at a senator. If they can get one senator and two congressmen, only then is there even a hope of putting up a viable presidential candidate. Many parties do have candidates running at the state levels. For example Chris Lugo is running as a green party candidate for the state of Tennessee.

If you look at economics and marking, the goal of any business is to convince people to give you money. In the case of political elections, it is to convince people to give you power. To say one should not vote for who they believe is the best, to say a third party vote is thrown away, is to acknowledge the susceptibility of the American citizen to the power of indoctrination. To vote for a major party that you do not fully believe in is to accept the question posed by ABC’s George Stefanopolous “is not whether elites should rule, but which elite should rule?”

The great enemy of the truth is very often not the lie—deliberate, contrived and dishonest—but the myth, persistent, persuasive and unrealistic. -John F Kennedy

1 The Canadian election and the Afghan War The Real News. September 11, 2008.

Well, we in America have our heads stuck up our ass about voting for anyone but those who "can win". More often than not, we like those we choose to be winners and not also-rans. That attitude, along with the monopoly the parties have over their constituencies, and the lockout on federal funds for a third party candidate, allows the Dems & the GOP to keep a third party from getting funded. Without federal matching funds, who has a chance. Along with the local monopolization of T.V. airwaves, it gives a top to bottom hold on politics in America. Perot had his best chance back in 1992 & 1996, then Buchanan blew it in 2000. The party was lost. What else can we say? America just wants these two parties & the only way to make change is move the local electorate in the correct direction. Notice I didn't say 'right' :)