My MacBook is about two and a half years old. Aside from upgrading the memory to 2GB when I initially purchased it, I’ve kept it stock and it’s been a fairly reliable laptop and the most convenient laptop I’ve owned. Currently it’s also the only computer I own that will let me edit and play HD content. Even then, the video becomes jumpy after about fifteen to twenty seconds during the editing process. Also, the battery no longer holds enough power to keep the laptop operational for over an hour. So a few weeks back I decided some upgrades were in order: upgrading to OS X 10.5, a new 500GB hard drive and new battery.

Looking at the simplest upgrade first: the battery. There is an excellent free utility called Coconut Battery which allows you to not only see the current battery capacity, but look at the original capacity and the age of the laptop. Newer versions of the application allow saving data points to track the capacity and degradation of the battery. 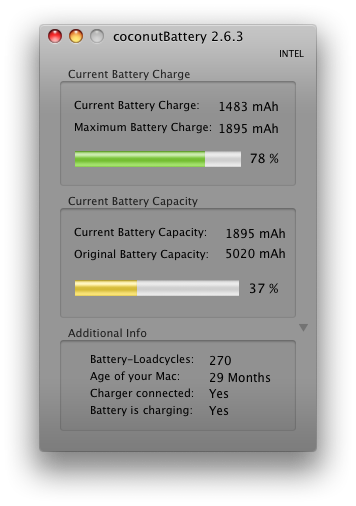 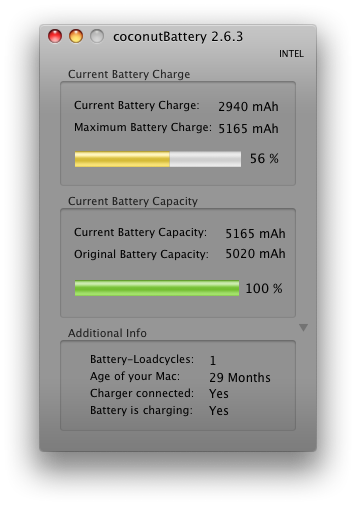 Lithium Ion (Li-Ion) batteries don’t suffer from the same memory effect as other types of rechargeable such Nickel Cadmium (NiCd) or Nickel-metal Hydride (NiMH). However, as can clearly been see by the screenshots above, Li-Ion batteries still degrade naturally over a period of time. After two and a half years, my laptop battery could barely hold over a third of its original capacity. In addition, it took much longer to charge as well.

Since the new version of Coconut Battery can save data points, I’m hoping by the time I retire this laptop that I’ll be able to be able to chart the capacity pattern of this new battery. I’m predicting it will be a natural logarithmic regression.

One additional thing I learned about the MacBook battery. It can not be removed while the laptop is on, even if it is plugged in. Unlike my old Dell Laptop which had two expansion slots providing for the ability to hot swap two batteries, removing the MacBook battery while hot caused the MacBook to crash and it had to be rebooted. 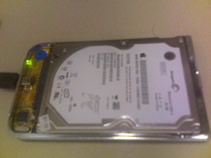 The previous hard drive was the standard 80GB that came with the laptop. I had found myself deleting unused applications and moving media from my laptop just so I could log and transfer video clips for editing. I eventually had to use a 40GB external USB drive as my video scratch disk. With dropping prices for SATA internal drives, I decided to upgrade to a 500GB, giving me more than enough room for all my applications and media clips. In addition, a low cost external SATA to USB enclosure allowed me to still utilize my old 80GB hard drive as an external disk.

Replacing the hard drive was about as simple as replacing the memory. They are both behind a plate on the side of the battery compartment. The hard drive did require a hex-screwdriver, which I did not expect.

Virtual desktops aren’t anything new or innovative. They’ve been available naively on UNIX/Linux systems for over a decade and as third party addons to Windows and Mac for years. The advantage of having “spaces” as part of the operating system layer itself is that newer version of applications will develop around and for the “spaces” rather than third party applications having to accommodate for other programs.

In addition OS X 10.5 does seem to add some speed increases. The visual additions and other small features are nice as well.

The upgrades I made were primarily to make the laptop useful again as a laptop and not just an overpriced desktop. However I did notice speed improvements when playing HD video within editing software. I’m not sure whether to attribute this to a higher efficiency from OS X 10.5 or if the larger hard drive allows the OS to have more swap space to play with (or both). In any case, these small upgrades, which cost under $200, seem to have given me some more life and years out of my laptop.